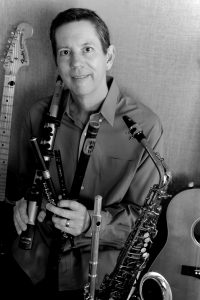 Whether conducting a 60-piece orchestra on the famed Sony sound stage or crafting an electronic score in his own studio, composer Billy Martin creates music to tell stories. It may be music that mirrors the drama of a feature film, an animated network series, or a video game; in all projects, Billy’s music moves in sonic counterpoint to the on-screen action.

For television, Billy wrote the theme for the long-running celebrity interview show Entertainers with Byron Allen.  He has contributed songs and music for feature films including Spiderman 2 and Bad Santa while TV series from The Mentalist to How I Met Your Mother have also featured his music.

In 2015 his score for the film VagaBond was named Best Original Score at the Studio City International Film Festival. In 2016 his score for the videogame Finding Dory: Just Keep Swimming was nominated for a GANG Award for Best Music in a Casual/Social Game.

Billy’s early musical education flourished on an axis of orchestral and pop influences. In high school, he wrote songs and experimented with multi-track recording before enrolling as a national merit scholar at Indiana University. “I was having fun studying composition and playing saxophone in jazz bands,” he recalls, “at the same time I was writing songs with the idea that I’d form a band, get a record deal and be famous. That’s what you do right?”

After college, he moved to Los Angeles to pursue the dream. He founded a band, nailed the requisite indie deal and hit college radio with an album’s worth of self-produced material. When the record label went kaput, Martin played local gigs and sessions. Then came an unexpected career possibility. Billy relates, “I knew some people who were writing underscore for various film and TV projects. They kept twisting my arm, saying, ‘I’m too busy to finish this episode this week — can you help?’ Once I had the opportunity I knew that it was the way for me to express myself and to do exactly what I wanted to do.”

Working successfully in so many visual mediums, it is evident that Billy must bring something very special to the table. What is it? “I think it’s probably the take-out food I bring with me to the spotting sessions,” he laughs, “if not that, then it’s an instinct. It’s always best to talk about the emotions behind what is going on and describe the story in those terms. A director can direct me just like an actor. I’d rather talk in terms of making things light or dark, scary or happy. Ideally, a director will be very comfortable with that because I’m comfortable translating this language into the musical expression that will give them what they want.”

These days, Billy is in demand as a composer for both big and small screens, with an expanding range of projects that engage him professionally and creatively. He concludes, “Shostakovich said you need to write everyday if you can. If you can’t write something then orchestrate; if you can’t orchestrate copy the parts. I do something related to music every single day. I’ve learned to trust my instincts — to believe that the first thing I come up with is the best thing — and it usually is.”